Is Your Hospital Safe From a Cyber Attack? "Healthcare is one of three industries facing the highest risk of a cyber-attack in 2017," reports Fierce Healthcare. In fact, every month the healthcare system already faces at least one cyber attack.

It's common for cyber security to feel like an almost insurmountable problem -- especially when even the government is struggling to keep us safe from hackers. Is there anything that a hospital administrator can do to keep its patients, records, and providers safe? We think there is -- and we believe the best place to start is with three fairly simple security tactics.

Nationwide, there are some big threats to cyber security in healthcare that may need a nationwide solution. In fact, it is one HHS's top challenges for 2017. Some of the biggest threats to healthcare cyber security include: ransom-ware, hacking, The Internet of Things, and internet use that just doesn't comply with security standards.

That said, there is significant "low hanging fruit" when it comes to shoring up a hospital's cyber security. In fact, some of the most common and costly issues are simple to prevent. They might not be flashy, or involve a 5-year plan, but they are likely the ways to keep your patients and providers safe from the most common threats they're likely to face.

Three simple cyber security issues that should be first on every hospital's list to fix:

Do we need a nationwide plan to stay safe from cyber attacks, especially when it comes to our healthcare system? Yes. But in the years that will take to form, it's crucial to protect your hospital from the most likely culprits, now.

We published a free whitepaper on using a BYOD while also keeping devices -- and your hospital -- secure. Download it here: 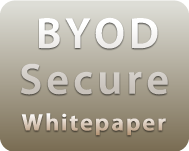 Photo from wocintechchat on Flickr, used under Creative Commons rights.