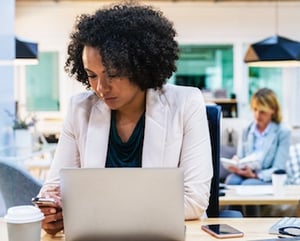 Black men have the lowest life expectancy of any ethnic group in the United States. Chronic disease — like diabetes and hypertension — play a big role. But the path to reducing rates of those maladies can seem unclear.

A new study by researchers in California showed a shocking finding in one parameter that could dramatically influence outcomes — the race of the doctor.

The study itself was pretty simple and looked at the likelihood of patients to accept preventative measures, comparing the likelihood with a white doctor and with a black doctor. The study participants were 702 black men in Oakland, California, who came to a clinic for a free health screening. They were randomly assigned to a black male doctor or one who was white or Asian.

The results were pretty stark (as elucidated by The New York Times):

— Some 62 percent of black men with a black doctor agreed to cholesterol tests, compared to 36 percent assigned to a doctor who was not black.

These rates might not sound world-changing, but the consequences of them are. If black patients were to agree to preventive care at these rates in the real world, researchers estimate that the gap in cardiovascular mortality between black men and the rest of the population could be reduced by 20 percent.

So was it the race of the provider itself that made the difference? Or was it something that black doctors were doing differently, or more effectively, than the white doctors?

There’s no hard evidence to answer that question, but one telling component of the findings are the comments written by both patients and doctors in the study. Black patients had equally positive comments of doctors, regardless of their race. But of black doctors, their comments skewed more emotional and effusive. Similarly, the notes on  the white doctors tended to be shorter and dryer. Black doctors’ notes were more detailed and more holistic, including comments on elements of the patient’s experience and overall life.

One of the black doctors in the study really affirmed that ultimately, it’s not about race — it’s about good care. “It’s something they don’t teach you in medical school — taking that extra step because you appreciate there have been barriers in the past,” Dr. ChaRandle Jordan said, saying that white doctors can reach out just as well and that a lot depends on how familiar a doctor is with black patients.

From our perspective, there are several key implications of this study for our work with medical collaboration and care coordination:

— A team approach is important. Sometimes the background of the provider can make a difference, and where that's true, having a diverse team working together closely, is a key asset.

— Good care is about more than the facts. Simply offering the appropriate preventative screening isn't enough. In this study, it appears that the black doctors' efforts to build rapport and even to push back on patients' initial reticence were a big part of their good outcomes. Having the perspective and tools to work with a more holistic sense of the patient is key.

Obviously, we believe that great care can happen among providers and patients of any race. But looking at race and differences in engagement and interaction shouldn't be taboo. We often say that "no one of us is a smart as all of us."  And this is one more example of how our colleagues down the hall may have a lot to teach us — if we are open to learning.

For stories of medical collaboration, download our Quick Guide: