Healthcare Collaboration Is No Replacement for Everyday Heroism 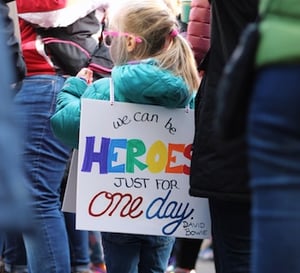 As healthcare providers, we have an almost unimaginable level of responsibility. Every day, we use our depth of knowledge, caring, compassion, and skill to cut people open, make life-or-death decisions, and execute sophisticated care plans in endlessly complex contexts.

For that reason, I think that many healthcare providers start their career with a healthy level of pride about their personal skill and end up having a fair amount of confidence in their own abilities.

That can mean that when the topic of healthcare collaboration comes up, there is a sense of skepticism. There's a subtle feeling of resistance, coming from the idea that, "If I have to ask for collaboration, it's because I wasn't able to do it on my own." Being passionate about collaboration, at ClickCare, we talk about working together as a team a lot. But does that mean that there isn't any place for individual achievement or even heroism in the work?

Recently, I was reminded that in addition to the deep rewards for teamwork, sometimes the skill and courage of a single individual really does "save the day."

On April 21st, James Shaw, a 29-year-old electrician, and his best friend Brennan McMurry went to a Nashville Waffle House for early-morning waffles. Minutes into their visit, a gunman opened fire. People were running and glass was shattering. But suddenly there was a pause in the shooting and Shaw realized that the shooter was reloading. That's when he leaped on the shooter, grabbed the rifle, and threw it over the counter. Although 4 people died in the attack, we know that the shooter had pockets bulging with ammunition and that Shaw likely saved dozens of lives in that courageous moment.

The week before, on April 17th, Southwest Airlines Flight 1380 was en route to Dallas when an engine exploded and shrapnel hit the fuselage, blowing a hole in one of the windows and partly sucking out one of the passengers (who eventually died.) Captain Tammie Jo Shults was calm and decisive in the cockpit, however. She radioed control without a hint of alarm in her voice. “Southwest 1380 has an engine fire. Descending.”

Guiding the plane towards Philadelphia with one engine out, she arranged for medics to meet the plane on the runway and then guided it to a smooth landing. There were 149 people on board and most thought the plane was not going to make it. But Shults was unfailingly collected and clear and skilled. As the New York Times reports, Captain Shults's reflexes and professionalism were hard-earned. "Captain Shults was well trained to handle stress in the cockpit. She had flown supersonic F/A-18 Hornets as one of the Navy’s first female pilots at a time when women were still barred from combat duty, before leaving active service in 1993." The story of the obstacles she had to overcome to pursue her passion and career are astounding and showed courage, grit, and heroism throughout. As a woman, she wasn't allowed to fly in the Air Force, and was denied combat positions as a pilot in the Navy -- but she flew in increasingly rarified and groundbreaking roles, including Operation Desert Storm.

Of course, in both of these cases, there was actually powerful teamwork behind the scenes as well. In the case of the Nashville Waffle House, Shaw's friend McMurry ushered people to safety and law enforcement hunted down the shooter in just 24 hours. Not to mention the doctors who treated the patients and other first responders. And on Flight 1380, flight attendants, the first officer, passengers, medics, and air traffic control all played a role in the successful outcome.

And, in neither case was there an unmitigated success. Four people died at the Waffle House and one person died on Captain Shults's flight. Heroes don't always have perfect outcomes.

All of that said, both Shaw and Shults saved lives, showed exemplary action and courage, and gave us examples of what a hero can be, and do -- and what a difference one person can make.

As you find opportunities for healthcare collaboration, don't forget that you're also, so often, a lone hero. Both ways of working are necessary. And you owe it to yourself and your patients to do the right one at the right time.